CAMS is an informal club of local model builders in and around the Fredericton, New Brunswick area. We have a lot of fun sharing stories, the hobby, and displaying our work at our annual show in the spring. We have members new and old, and are quite accustomed to having military members who show up when they can. There are really very few responsibilities involved to become part of the club. Join us and share your passion.

The Capital Area Modeller’s Society (CAMS) - as we are now known - had humble beginnings in 1986 in the town of Oromocto, New Brunswick, Canada, home of CFB Gagetown the largest military base in the British Commonwealth.

Two modelers, an Artilleryman named Rob Stobbs and a Tanker named Steve MacMillan, went to Oromocto Leisure Services, looking for a place to get together and build models. They were directed to the Adult Program Coordinator, a gentleman by the name of Norm Russell, who unknown to them was also a modeler. Norm’s position with Leisure Service allowed them access to a free room in the Oromocto Community Center to meet. Word travelled fast and soon builders of many different types of models wanted to share their enjoyment of the hobby and a model club was born.

These were exciting times in the modeling world, the quality and quantity of models was expanding, there was a lot of experimenting with the emergence of the aftermarket companies such as Verlinden, Detail Master, and others producing resin kits and photo etch parts. Modelers like Shep Paine were expanding the boundaries of the hobby. Builders were creating models with more detail and definition than seen before and it was just natural that CAMS members would want to show them off.

The first CAMS model show and contest took place in the Oromocto Community Center in spring of 1988 and was judged by Master Modeler, Tom Miller of Burton and  John Wells who ran the Railhead in Oromocto. The winners and the sponsors of the first show are long forgotten but the bug was in place.

During the 1990’s CAMS went thru many changes. Among them was the move from Oromocto to the Capital City. Meetings were still being held in member’s homes, giving modelers a chance to show off their projects and stashes and to share some of their special techniques.

The CAMS Spring Show also made the move from Oromocto in the 90’s, drawing many of the top modelers from around the Maritimes. The last years of the 20th Century brought more changes to CAMS and the show. We relocated the show to St. John’s Anglican Church hall. The venue provided a more controlled atmosphere and we were able to bring in more vendors. The interest in the show was growing and major changes were in the future.

The number of categories increased and presenting awards to just the top three modelers no longer seemed adequate.  CAMS adopted a Gold, Silver and Bronze award system for all judged kits. The new system was readily accepted by modelers because everyone was recognized for their efforts. The Show was gaining a reputation as an enjoyable meeting of modelers as well as a competition that was judged fairly for all.

The 21st Century dawned with the need for more changes in CAMS. It was getting more difficult to find meeting locations, many of the members could not host due to limited space. This problem was eliminated when one of the members stepped up and offered the use of the Saint Mary’s Anglican Church Hall. The Members quickly accepted and CAMS had a home for our regular meetings but off night meetings at member’s homes were still important. CAMS had by this time out grown the St. John’s Hall as a venue for the Show and a new venue was needed. The Saint Mary’s Church Hall seemed like the natural choice, it was larger, more affordable and offered more flexibility for vendors, judging and classes.

The CAMS Spring Classic Model Show and Contest is the longest running show in the Maritime Provinces, and one of the oldest in Canada. We have had entrants from as far away as Ontario and have gained International status with visitors from Maine. The Show has only missed one year in its 20+ year history and even the Great Flood of 2008 didn’t stop the show.  Due to the success of the Show we have again had to move to a larger venue but as we approach our 23rd show in 2010, we are proud of the reputation the CAMS Spring Classic has developed.

We at CAMS have had our good and bad times over the last 20+ years but none worse than the sudden loss of a member. We lost 2 of our best in Bob McNutt in 2001 and James Moulaisson in 2008, they are missed but their memory lives on in their awards.

Little did Norm Russell and the others who came together to find a place to build and talk modeling realize what they had started. Over the years some of the finest model builders in the Maritimes and Canada have been CAMS Members or participated in our shows.

In the 21st Century we are pleased to welcome back many of the original members who are returning to the hobby by themselves or sharing it with their children.Whatever the future of modeling is, CAMS will be there, welcoming modelers to “Share Your Hobby”.

Join us for the Annual Spring Classic Model Show.The show is the largest and longest running model event east of Montreal and features some of the finest models from Eastern Canada, Quebec and Maine.

Stay Up to Date with CAMS News! 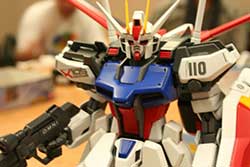 CAMS is an informal club of local model builders in and around the Fredericton, New Brunswick area. We have a lot of fun sharing stories, the hobby, and displaying our work at our annual show in the spring.

CAMS has put together a selection of interesting modeling related links that we think you'll enjoy exploring.

Keep up to date with CAMS News